The Hartley Arms is opening its doors every other Thursday, to a world of live entertainment with Honesty Live! Sit back and relax with friends and family whilst enjoying a range of live entertainment from music to comedy. Drinks and food will be available throughout the night. Doors open from 5.30pm with entertainment starting from 8pm. Entry is FREE!

Here’s a line up of entertainment in August.

Noella has been passionate about the theatre from a very young age, learning to dance at the age of 5 and performing in her first pantomime at the age of 8. Noella’s passion grew which led her to being trained in Ballet, Jazz, Tap, Irish Dancing, Street, Classical Singing, Contemporary singing and being accomplished in the Clarinet all before attending professional training. Noella trained at the prestigious Urdang Academy for three years where she gained her Bachelor of Arts in Professional Dance and Musical Theatre. Credits whilst training include: Elle Woods in Legally Blonde, Ensemble in Spring Awakening, Miss Dorothy in Thoroughly Modern Millie and Featured Singer in Link Showcase. Noella was also chosen to perform ‘Pulled’ from The Addams Family in a workshop led by Andrew Lippa. Since graduating Noella has been a Dance Captain, Choreographer and Cabaret Singer for Siblu in France.

Noella will be performing a Cabaret style set featuring songs from some of her favourite musicals. Some well-known and some more obscure and from Classical to Contemporary.

Charley Hart is a solo artist with an incredible voice and who sings lesser known but much loved songs, from artists such as Katie Tunstall to Paolo Nutini. She’s been gigging since she was fourteen years old and has written and recorded a number of her own songs that have appeared on Spotify. Her singing is a hobby that she has developed and grown since she was young, and she now enjoys playing regularly at local venues and events across West Berkshire and Hampshire. Her style is acoustic indie. 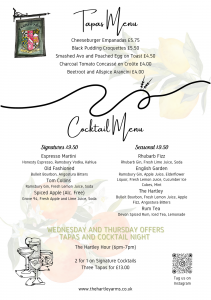 By: The Hartley Arms