The Science of Bread

The Science of Bread

The Cambridge English Dictionary defines bread as: ‘a food made from flour, water, and usually yeast, mixed together and baked’, seeing as most supermarket bread rarely includes just these ingredients, it poses the question whether their bread can still be called ‘bread’. Much like the uproar that dairy farmers had with milk alternatives being called ‘milk’; how much can you deviate from the original form for it to still be considered the same thing, otherwise known as: the Ship of Theseus paradox.

Despite bread’s fairly simple ingredients, there is a lot of science behind how these simple ingredients interact to create bread, and how changing them varies the bread’s characteristics. Most people buy bread out of habit and reach for the supermarket bread perhaps out of ease, or because it’s cheaper, but this is without taking into consideration the true cost of bread and how this simple dough is properly formed. By exploring the science behind bread, hopefully an appreciation of true bread, and the artform behind  creating it, will form.

If bread requires so much scientific input, then how have people been baking it  for thousands of years? In the early days of bread production, it  was actually closer to a tortilla than the doughy loaf we now know and recognise today. Evidently, the earliest bread was made in 8000 BC in Egypt, with the ‘qern’ being the first known grinding tool. It is thought that Egyptian brewing skills is how the first sourdough was made, through adding wild yeast to the bread mixture combined with being in a warm climate. Thus, bread as we know it began to take shape. So in answer to the initial question – it was by accident! 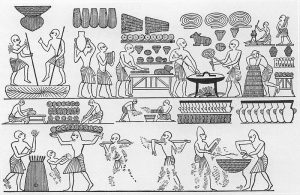 Bread very much stayed the same for numerous years, until the 20th century which saw the addition of chemicals. Bread became whiter, softer and lasted much longer, far from the original rustic and crusty loaf that has now become somewhat of an indulgence today. The flour was heavily processed, making it void of most of its minerals and vitamins, which prompted the government to enforce the ‘enrichment of flour’ – essentially chemically fortifying the bread with vitamins and minerals that were lost. When this industrially produced bread became so popular, it changed the shopping habits of almost everyone. Society was too accustomed to bread being able to stay fresh for a month due to the many chemical additives and preservatives, causing the price of more ‘rustic’ bread to increase as the demand was no longer there, leading to where we are at today with ‘proper’ bread being considered more of a luxury.

Bread under the Microscope

The process of making bread can be broken down into four steps: mixing the ingredients, kneading the dough, leaving the dough to rise and baking the dough. Again, this seems very simple, but what we don’t see is what is happening on a molecular level. 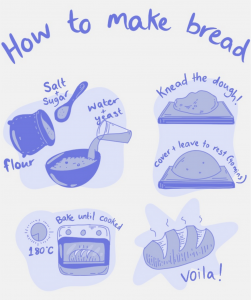 Starting with flour, the most important component of the flour are proteins, which are collectively known as gluten, a fairly familiar term. In Latin, ‘gluten’ actually means glue, as it is two proteins stuck together, and it acts as a kind of glue in the process of bread making. As soon as water is added to the flour, these proteins are then able to interact with each other and form chemical bonds (which act like glue), eventually creating a network of gluten throughout the dough.

Kneading the dough helps these proteins to uncoil and interact with each other again and again, making a stronger network between each bond of protein in the dough. The addition of salt also helps to strengthen the gluten network, together with kneading essentially making the dough more elastic and, of course, adding to the final flavour.

Creating this network is vital for the bread to be able to rise, but also is yeast. Yeast contains enzymes that are able to break down the starch molecules in flour into sugars, called glucose, which acts as a food for the yeast. It metabolises to produce carbon dioxide and ethanol. The ethanol is expelled in the baking process – making bread definitely not alcohol! The carbon dioxide however diffuses through the dough and enlarges pre-existing tiny air bubbles, the remaining carbon dioxide is also expelled in the baking process. This is another reason why kneading the dough is important, as it ensures that a large number of these pre-existing bubbles are present.

Once the loaf is baked you can enjoy your perfectly scientifically prepared bread; proper bread. How can a machine beat the authenticity of hand making a loaf of bread?

If yeast is so vital to the rise of the dough, then what about sourdough? Sourdough overcomes the need for yeast by starting with a ‘sourdough starter’. This is where flour and water are gradually mixed together over a number of days to allow it to ferment. This ‘starter’ then needs to be fed with additional water and flour; whole grain flours tend to work better as they contain more of the microbes and enzymes needed to drive fermentation.

During the fermentation process, enzymes in the flour break down the proteins into sugar molecules, glucose, the microbes then digest these sugars producing ethanol and carbon dioxide, explaining why sourdough requires no addition of yeast! The remainder of the process is very similar to your typical loaf as discussed, knead the dough to create a more stretchy dough, and then bake! Another added benefit to sourdough is that it has a longer shelf-life than bread made with natural yeast due to the fermentation process it goes through.

After one analyses the science behind the making of bread, all of its complexities and the beautiful (and tasty) end result, poses  the question of whether it is considered merely science, or a perfected artform. Whether scientific or an artform, there is no way of cutting corners in this meticulous process with chemicals and preservatives whilst still expecting the same result. What does it compromise? Our health? The taste? The quality? When does the compromise become too much? How much can you change the original formula for it to still be considered ‘bread’? Many of these questions you can only answer for yourself, but whatever your choice, it starts with you. 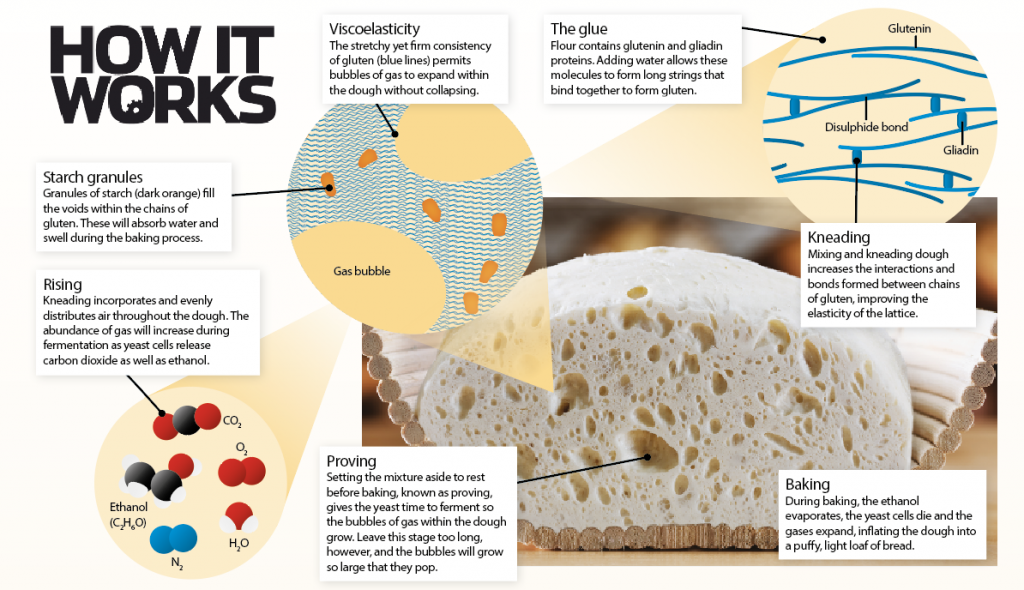 40 thoughts on “The Science of Bread” 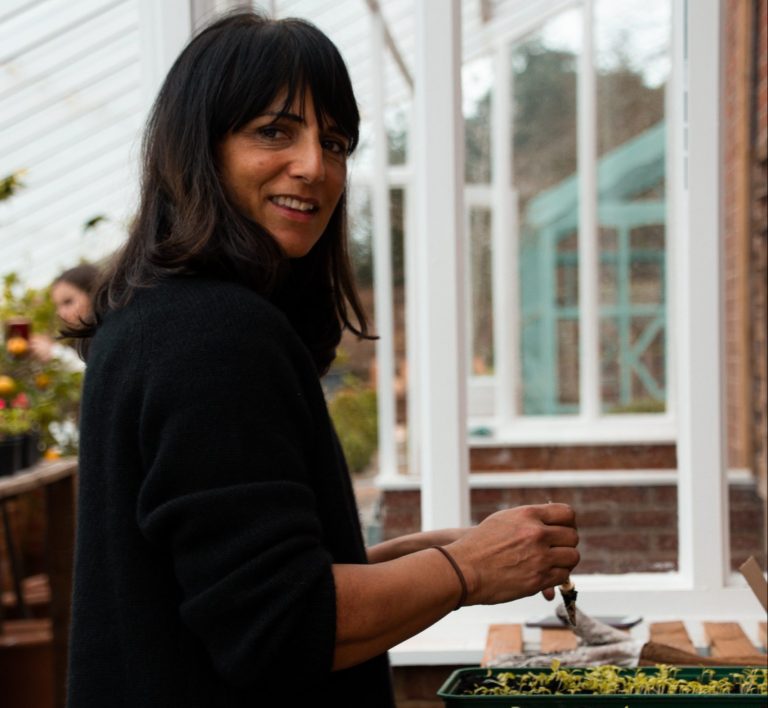 This dish is quick and easy and great to make if you have any leftover vegetables waiting to be used in your fridge. 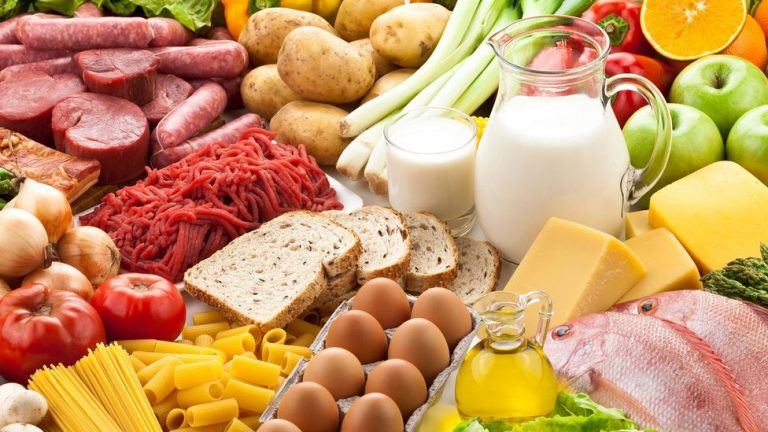 When presented with the word ‘food’, immediate connotations that might come to mind include fruit, vegetables, bread, meat, fresh, grown and so on. All with

Together with one of our brilliant local suppliers

You know that moment when you want a treat, but yo

The summer holiday wouldn't be complete without a

Will your children be visiting the Serious Cricket